Everyone misses a picture, even the pros don’t get every shot every time but sometimes, just sometimes there is something you can do to salvage an image you really wanted but just didn’t quite get.

The photograph below is my cousin with his niece at a family party. I spotted the opportunity grabbed the camera and the shot unfortunately having consumed the odd (double) Bacardi and Coke or two I missed one small but very important detail, the on button for the flash. Three frames later, the moment has passed and the best of the three images is the one below, rather orangey red, dark and slightly too soft. 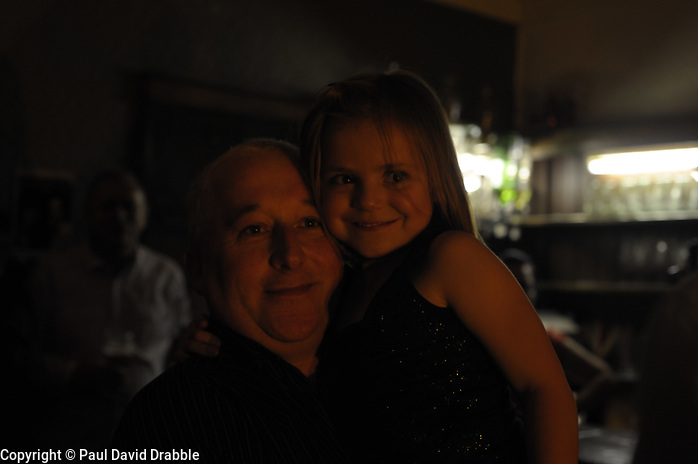 On the night I wrote off the shot as a duff one but I didn’t delete it, I never do, I think its because, back in the days of film, I was taught never throw away a negative. The next morning , well OK lunchtime, it was a great party and we did have one or two more of those Bacardi and Cokes, I spotted the shot again and considered it worthy of five minutes TLC. My first instinct was to lighten it and try and take some of the redness out. While I was pleasantly pleased with the results of lightening the photograph it quickly became apparent that recovery wasn’t going to be totally successful thanks to masses of colour noise while trying to get the colour balance right, at which point I decided to get all retro and just turn the thing Black and White. A little more fiddling this time with contrast and unsharp mask to loose some of the softness in the photograph and finally a little cropping to tighten the picture up and hey presto the result…….. 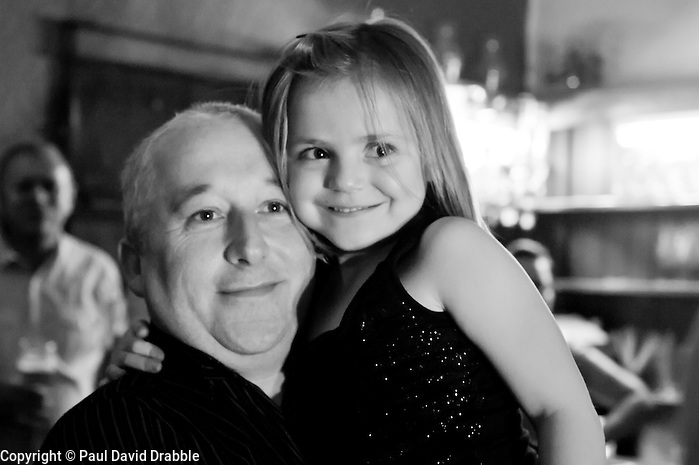 You cant make a silk purse out of sows ear, as they say, and the same goes when trying to recover a photograph like this one. Sometimes a mistake will leave you with an image that really is not salvageable, no matter how skilled you are or how much time and effort you put into it, so be realistic. This photograph will never be a technically perfect image it will always be a little soft and a little noisy but it does leave me with a satisfied smile, especially after reading mums comments about her daughters photo in my Facebook photo album.

An excellent film about Brian Duffy one of the top 3 London photographers of the 60’s who made his name along side David Bailey and Terence Donovan. Its a compelling look at a real photographer who worked in real photography and at a time before Photoshop. At the hight of his career he burned his negatives and walked away from photography not returning until his Son Chris found some of his work and inspired his dad back behind the camera.

It now seems there are some possible doubts about whether the Ansel Adams glass negatives are actually by the great photographer or not. An 87 year old lady from Oakland California saw the story on a TV news show and spotted that one of the images is almost identical to a photograph hanging on her wall. That particular photograph she believes was shot by her Uncle Earl, who was an amateur photographer living in the Fresno, California, area around the time experts say the glass negatives were made.

This turns the story into a real world example of images becoming “Orphaned” (a situation where the creator of an image or images cant be identified) to some degree an extreme example of how orphaning can effect the perceived value of a photograph. If they are by Ansel Adams they’re worth an estimated $200 Million Dollars if they are by Uncle Earl they’re worth….. well your guess is as good as mine but you can bet good money its significantly less than $200 million, yet they are still exactly the same photographs as they were when I posted on the 27th of July.

While the devaluation of images produced through modern digital photography is making it harder and harder to earn a living as a professional photographer it seems people still value the work of great photographers of the past.

Some old glass negatives by Ansel Adams, the legendary American photographer best known for producing stunning landscapes, inventing the zone metering system and founding the f64 club have turned up in garage sale. They were thought to have been destroyed in a fire along with 5000 others back in 1937 their current estimated value $200 Million

I wonder just how many images of today’s nationally and internationally published will stand the test of time and be considered truly outstanding in 70 years time.